Canoes, like kayaks, are very old – they were the first means of human navigation, except for rafts.

Canoes were among the first man-made boats in the Americas, Africa, Southeast Asia, and Oceania. The word “canoe” comes from the Spanish Canoa, which in turn comes from the Caribbean Ka-no-a, meaning “to float on water.

The idea of canoeing originated with late Paleolithic people (35-40 thousand years ago), probably at the sight of a tree trunk floating on the water. With the appearance of the first primitive tools and fire-making skills, people began to hollow out and burn holes in solid logs and give the external shape to the first canoes. They had a spindle-shaped hull. The method of rowing was one single-bladed shovel-shaped oar without a paddle.

Much later appeared frame canoes covered with animal skins or covered with tree bark. Sailboats and outrigger canoes resembling modern catamarans also appeared in Oceania. They played a key role in the settlement of people in the Pacific islands. 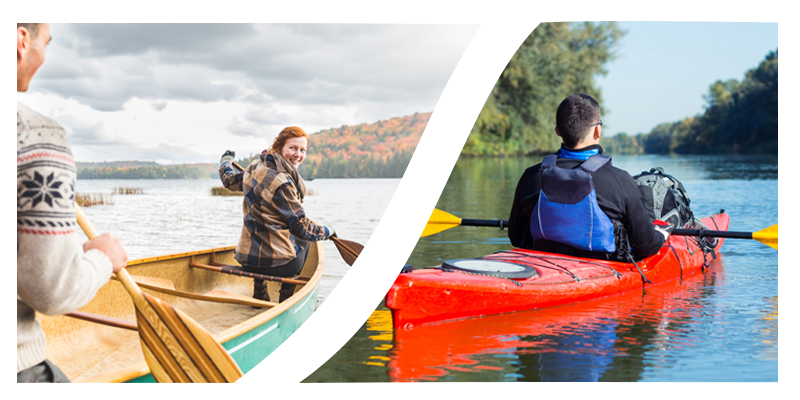 In Europe they also made canoes, for example, in Denmark they found the use of dolgan canoes with oars from the period of Ertebelle culture (about 5300-3950 B.C.). Zaporozhye Cossacks made “oaks” – canoes from whole tree trunks on which they sailed among the rapids of the Dnieper River.

The first factory, which produced canoes industrially, appeared in Canadian Quebec in 1750. Sometimes all modern canoes built in a non-traditional way are called “Canadian” canoes.

The kayak also has a long history. A kayak is a narrow and long hunting boat of the peoples of the North (Eskimos, Aleuts, Chukchi, Inuit, etc.), up to six meters long, used to chase sea animals. An oar with two paddles at each end was used to propel the kayak. The use of such a double-sided paddle is a distinctive difference between kayaks and canoes.

The frame of a kayak was made of thin wooden or bone planks and covered with walrus, seal or seal skin; the top had a hatchway for the hunter. A man sat inside the hull of the kayak, below the water level, which made this boat more stable. The cold waters of the northern seas and rivers where kayaks were used made it necessary to use a special “skirt” – a circular cape around the passenger that provided some protection against water pouring into the cockpit. The kayak was dangerous when capsized – it was difficult for a person to quickly leave the boat while sitting deep in its hull. Even the “Eskimo rollover” was invented for this purpose – an “overturn” somersault of the kayak with the passenger, using a special movement of the oar at the moment of the rollover. For this and other reasons, the kayak was strictly a single-seater “individual” hunting light craft.

Canoe and kayak: what they have in common

Some kayaks are structurally similar to canoes, they are sit-n-top kayaks where the passenger is not inside the hull but on top of the kayak, i.e. above water level.

What is the difference between a canoe and a kayak?

The main difference between a kayak and a canoe is the paddle. A canoe paddle has one blade, it’s alternately lowered into the water for paddling on both sides of the boat’s hull. A kayak paddle has two paddles on opposite ends.

Also among the differences should be noted the following: 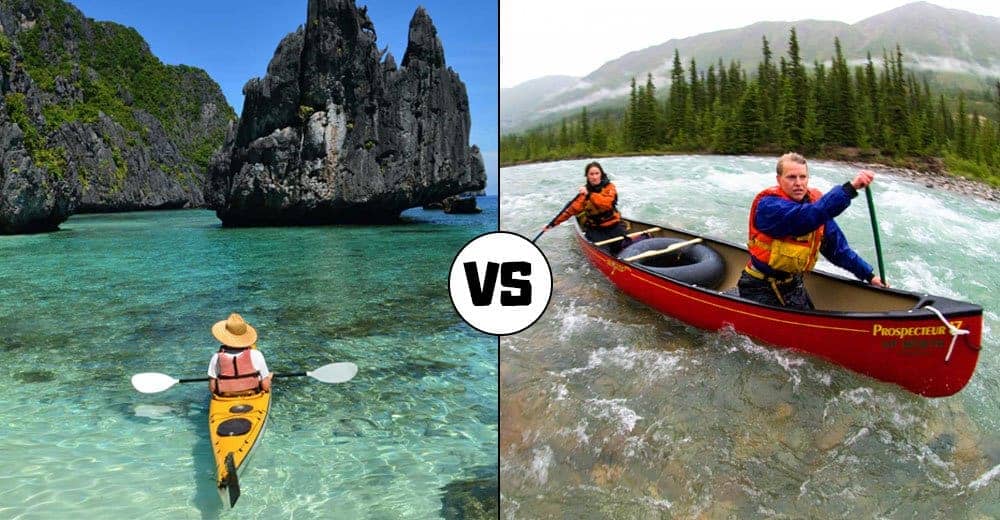 What to choose – canoe or kayak

Of course, before making any choice, you have to decide what exactly you plan to use the watercraft for. Both types of these lightweight boats are great for recreation, travel, extreme sports, fishing or hunting.

Modern inflatable transom canoes have a much greater carrying capacity and passenger capacity than a kayak, and when an outboard motor is used, their speed is not comparable to that of kayaks.

Motorized inflatable transom canoes are compact to carry and store, they are in no way inferior to conventional inflatable rowing or motor boats, and in some respects superior to them in terms of sailing qualities. They are excellent for long distance crossings in open water.

Sport models of classic canoes have a one-piece, unassembled, open symmetrical hull, with the passenger either sitting on the can or standing on one knee on the bottom while paddling. The bi-directional symmetrical hull makes it possible to paddle both ways without turning the boat around.

Kayak is functional for extreme river rafting (Sit-in cockpit models), where the center of gravity is lower, the “skirt” protects the passenger from splashing and slamming. Sit-on-top models, where the passenger is above water level, are convenient for fishing and water walks.

Kayaks are suitable for cold seasons, being closed (Sit-In models). Kayaks are maneuverable in paddling thanks to the paddle with two blades. Kayaks can be collapsible and inflatable or solid made of plastic which influences their compactness in transportation and storage as well as their sailing qualities. Kayaks usually do not have the option of installing a motor. Kayaks can be single and double, with passenger inside the cockpit (Sit-In models) or with the passenger sitting on top of the kayak (Sit-On-Top models).

So, taking into account all of the above, it will be easier for you to decide on the choice of a boat for active recreation on the water. And it will be a canoe or a kayak – it’s up to you to decide.