The undisputed market leaders and the most mass-produced kayaks today are kayaks made of polyethylene and plastic of different kinds. Several different production technologies can be used – from solidly molded kayaks using rotomolding technology (rotomolding kayaks), squeezing parts of the kayak from a sheet of plastic which is preheated and then the two parts of the kayak are glued together (so called “thermoform”). Also some manufacturers use the technology of “blowing” plastic under great pressure.

Plastic (polyethylene) kayaks owe their popularity first of all to very high durability and comparatively low price. Besides, wooden kayaks are produced today but they are more works of art and implementation of creative potential of the masters than practical products for everyday use. Wooden kayaks should only be used in clean water where there are no stones that can scratch the varnish or pierce the body of the kayak. Wooden kayaks are mass-produced in very small numbers in the United States and Canada, where they are more popular. But drawings or kits with step-by-step instructions on how to make such a kayak yourself are more popular. 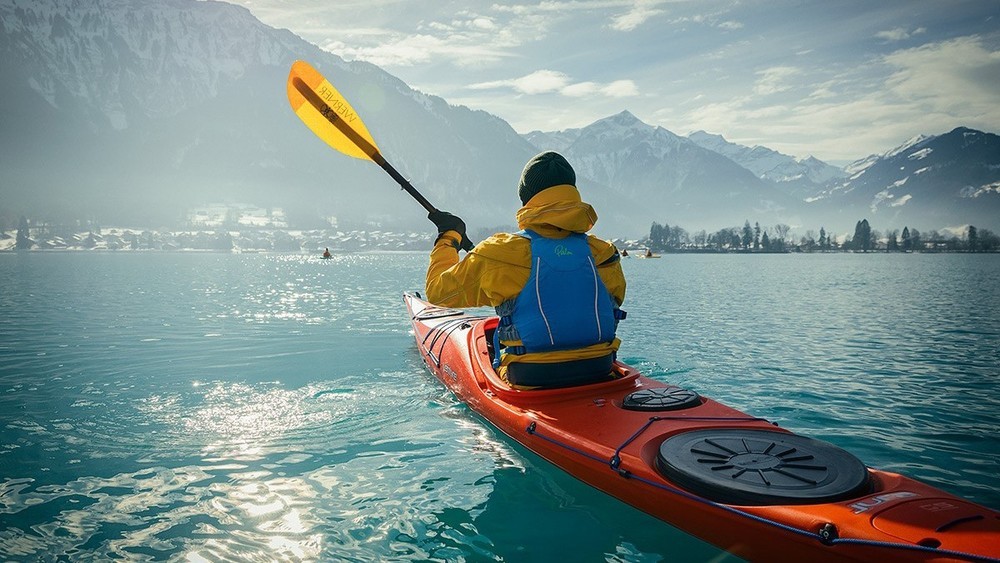 Depending on the purpose of the kayak and the nature of the waters for which it is supposed to be used, it is customary to distinguish the following types of kayaks, and accordingly – kayaks that are used:

Recreational (“recreational”) kayaking is characterized by the use of predominantly short, fairly wide single-seater kayaks with increased stability, as well as wide two-seater kayaks, which may also have an additional third seat for a child. Recreational kayaks stand out primarily for their wide hull and large cockpit. The main purpose of these kayaks is for short-term recreation on calm water.

Touring kayaking, or as it is also called – tourism, travel

Touring (touring) kayaks are kayaks that are used as widely as possible – from the calm standing water of large rivers, lakes and canals to the sea coast with fairly high waves. They are significantly longer and narrower than the recreational kayaks, but still stable enough to be easily mastered by novice kayakers. Tourist kayaks are mainly designed for longer one or two day trips. Such kayaks have two or even three luggage compartments for stuff, food and water inside. Often these kayaks have additional steering systems or a retractable keel to improve course stability.

The vast majority of modern touring kayaks have very comfortable, adjustable upholstered seats with high backs. The hull of these kayaks has a specific harness for securing luggage on top of the kayak. There is also a safety cord around the perimeter of the kayak’s hull that you can grab onto if you flip over and have to get out of the kayak. Tourist kayaks are designed primarily for one person, although there are two-seater versions, but they are much smaller.

In terms of comfort and sailing qualities tourist kayaks are way ahead of recreational kayaks and come close in speed and sailing characteristics to long sea kayaks.

When talking about speed in kayaks, no one counts the speed in kilometers per hour that a particular kayak is capable of reaching. In the end, the speed of a kayak always depends on the paddler. In kayaking, speed equals ease of moving through the water. The faster a kayak can go, the easier it is to glide through the water, which means you will need to expend less effort to cover the same distance and you’ll end up having more fun paddling. So, the speed performance of a kayak is not so much a measure of its “speed” as it is a measure of the ease of gliding (paddling) the kayak through the water. 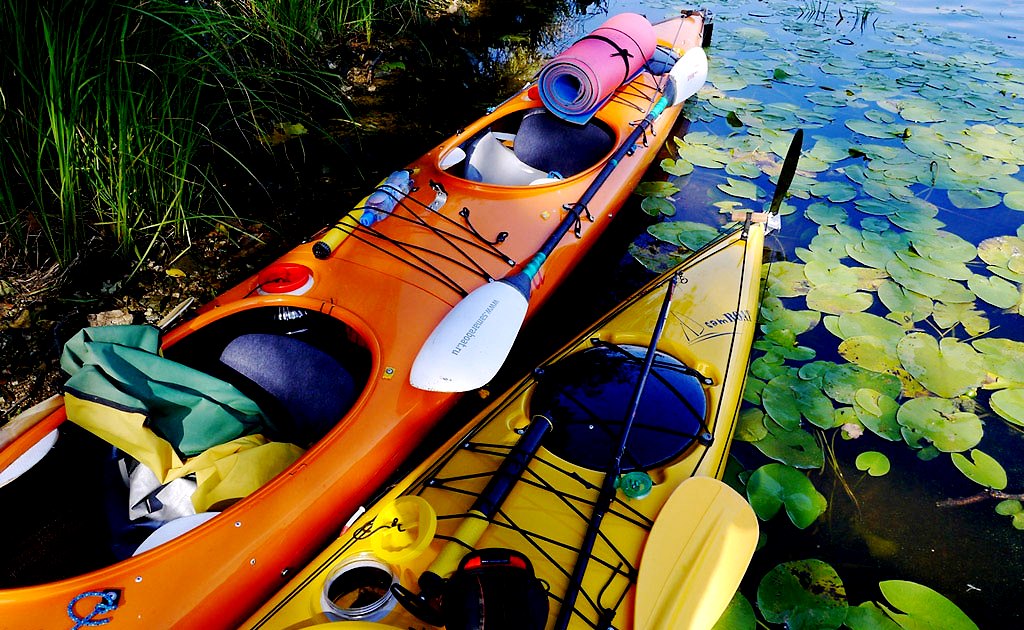 The speed of a kayak (ease of movement) directly depends on two main indicators – the length and width of the kayak. The longer and narrower the kayak is, the faster it is able to move through the water. The best ratio of these two values can be found in sea kayaks.

The first thing that distinguishes a good sea kayak from others is the long length and the pointed and raised bow and stern of the kayak. This structure of the hull of the kayak is specially adapted for passing high sea waves and so that the water does not flood the cockpit of the kayak every time. The main requirements to sea kayaks are its “ability” to fight high sea waves, steerability and non-strippability.

A kind of sea kayaks can be called sea expedition kayaks. They differ in big total volume of the hull, big luggage compartments which are tightly closed. Sometimes their number can be up to 4. Such kayaks may also have a steering system, a kayak deck harness to hold small objects, and a safety cord around the perimeter of the kayak. There may also be a special place to mount a compass or GPS navigator. By the level of extreme sea kayaking sometimes does not concede at all to kayaking on stormy rivers with waterfalls, though there are quite different requirements to kayaks and quite different characteristics are needed.

Extreme kayaking or as it is called in the West – “white-water” kayaking – kayaking on rough (“white”) water.

The basic (visual) difference of white-water kayaks is a relatively short hull, on the average – from 2 to 3,5 m. which can have short rounded or flat and sharp bow that rises sharply upwards and short, often cutted stern. Such kayaks are primarily designed to traverse mountain rivers with steep rapids of even the highest complexity.

“river running” – actually classic rafting on mountain rivers. It is a simple passage of turbulent rivers, which may include the passage of rapids, small waterfalls, rifts, etc.

“Creek kayaking” is kayaking through fast mountain rivers with lots of waterfalls and rapids of high complexity. 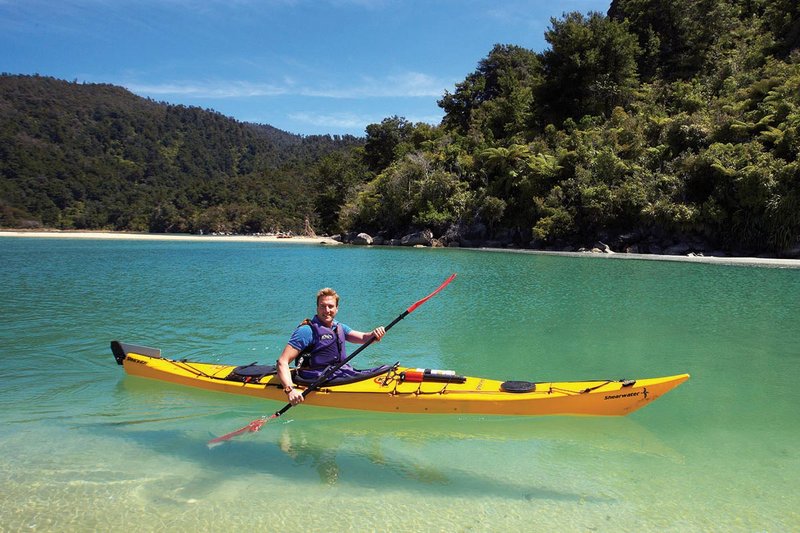 “Freestyle kayaking (less commonly referred to as playboating, play kayaking or rodeo kayaking but they all refer to the same discipline) is kayaking a variety of tricks on standing river waves that form in some rivers with strong currents. Such standing waves are also called “barrels”. It should be noted that such standing river waves on which you can do freestyle is rather small. In Ukraine, for example, there is only one good “barrel”, which is located in the Kharkiv region.

Freestyle elements are performed in the barrel or on the shaft. There are quite a few different elements (figures), from the simplest that can be performed even by beginners to the most complex, which are under the power of a few. Freestyle kayaking refers to types of kayaking, which develops worldwide most actively, each year there are new models of kayaks, which contribute to the performance of complex shapes. Regularly held competitions of different levels – from local to open country championships and European and world championships.