It is almost universally forbidden by the operating rules for kayaks to pull a loaded kayak onto dry land or to push the kayak onto the water when someone is sitting in it. Getting into a kayak is only from the water, but getting out of a frame kayak is also mostly on the water. Thus it is almost impossible to get into a frame kayak without getting your feet wet. 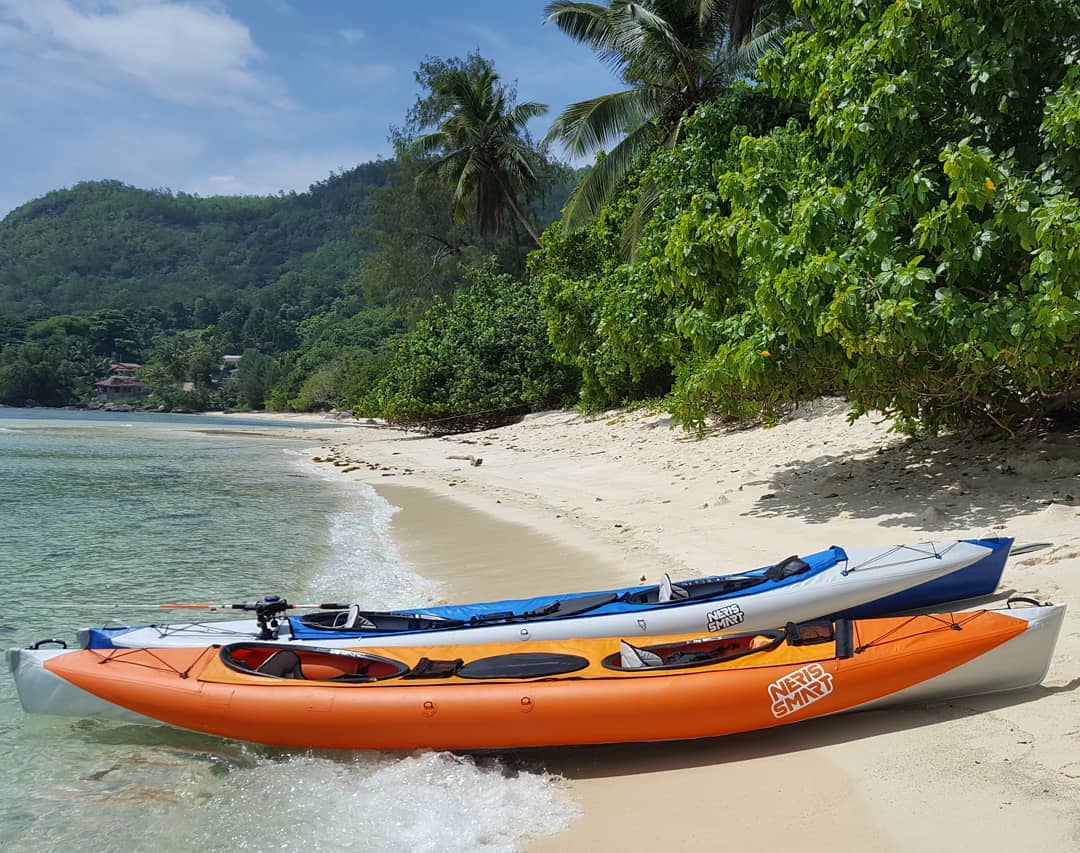 Another problem with frame kayaks is their “survivability” in extreme conditions. Despite frequent use, a kayak is not the right tool for rough water. It is not survivable enough – contact with rocks is often an emergency situation and can lead to damage of the shell or the frame itself (and on rough water contact with rocks is almost impossible to avoid). Frame kayaks are also insufficiently unsinkable – most of them do not have sealed chambers, as in modern plastic kayaks. They are also not steerable enough – free riding position of the paddler doesn’t allow to use your body in a kayak. They try to take some measures against the collision with the stones – refine the skins or put foam, and for giving the effect of non-strippability put containers (inflatable balls or cameras, etc.), but against the “clumsiness” of kayaks it’s almost impossible to do anything. Larger sized frame kayaks are not designed for abrupt maneuvers. Their main purpose is to move in calm water along a relatively straight path.

Does it mean that kayaks are a relic of the past? – Absolutely not! There are a lot of variants of complicated trips where you cannot replace the kayak by any other type. This can be due to the difficulties in getting the equipment to the rafting spot such as hiking in very rough terrain or using public transport (rail, air, buses, etc.).

What is an inflatable kayak

The main disadvantage of most inflatable kayaks is the lack of rigidity of the kayak where the paddler sits and the sagging under the weight of the paddler, which leads to bulging of the bow and stern and significantly worsens the performance of the kayak. The problem is especially pronounced in single seater inflatable kayaks, where the seat is placed in the middle of the kayak and there is no rigidity frame. To prevent this sagging effect, the kayak should also be evenly loaded along its entire length.

Disadvantages also include short-livedness – like any other synthetic materials that inflatable kayaks are made of, they have their own limited lifespan. Also possible cuts or punctures in the chambers of the kayak, much less often – the unraveling of the seams. A little inconvenient may seem the fact that with the large carrying capacity, the inflatable kayaks have quite little space for luggage and virtually no luggage chambers. Sometimes they can be replaced by pockets, but still the space inside inflatable kayaks is much less than in frame kayaks or plastic kayaks. You can also sometimes find models with a more extended bottom to increase capacity, but then such an inflatable kayak already looks like a long inflatable boat.

All inflatable kayaks have quite a low draft and most of the cylinders “lie” on the water, which leads to a lot of sail. Such kayaks easily get blown away by strong gusts of wind, it’s much more difficult to sail against the wind than in rigid hulled kayaks and it’s almost impossible to keep straight course in strong side wind. The course of an inflatable kayak can change with each gust of wind. For a more stable course inflatable kayaks are equipped with guide fins and some models may be equipped with a steering system.

The non-disassembled kayaks (or rigid-hulled kayaks) differ from the other design options primarily in the monolithic nature of the kayak’s hull. The hull of a rigid kayak can be made of a variety of materials, from fiberglass to polyethylene, polyester, ABS plastic or Kevlar-carbon fiber and other materials. Unassembled kayaks have the best sailing qualities and are able to accommodate the maximum amount of cargo for a hike. For that purpose, hulled kayaks can be equipped with sealed luggage chambers. In addition, hulled unassembled kayaks also have the most comfortable seating. Today, unassembled kayaks are the undisputed leaders in the world of kayaking and they are the ones that come to mind when we hear the word “kayak” once again.